Școala Gimnazială Nr. 1 is located in the eastern part of Otelu Roșu, Caraș-Severin County, a locality located 18 km from Caransebeș, in the Bistra Valley, on both sides of the Bistra River, at Republicii Street, no. 79. The school has an area of 3,811 square meters and includes 5 buildings, with classrooms, offices, laboratories, a gym, a library, but also a modern and wonderful documentation and information center. The school population has a staff of 502 students and 32 teachers.
Școala Gimnazială Nr.1 Oţelu-Roşu inherits the primary school from Ferdinand (the old name of the city) which functioned since 1884. In 1948 the unit becomes the elementary school of 7 classes. The year 1953 is the year of birth of high school-Mixed secondary school, with two real and language sections. In the school year 1965-1966, it became the High School of General Culture. In the years 1975-1976, the high school moved to the place where Liceul Bănățean operates today. Because of its historical background, the school has been declared a historical monument. 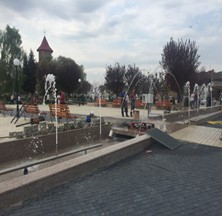 Oțelu Roșu is a rather small town in northeastern Caraș-Severin County, Romania, in the Bistra Valley. It is situated on the national road 68, between Caransebeş (21 km away) and Haţeg. The town administers two villages, Cireșa (Bisztracseres) and Mal (Mál). It is situated in the historical region of Banat. 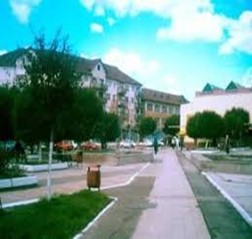 Oțelu Roșu is located at an altitude of approximately 300 meters in the Bistrei Valley, which is between the Poiana Ruscă Mountains to the north and the Țarcu Mountains to the south. To the south of Oțelu Roșu is a large piedmont of the Țarcu Mountains, locally named Gai. To the north the town makes direct contact with the foothills of the Poiana Ruscă Mountains. Dominant heights are the hill of Ferdinand (overlooking the foundry) and the hill of Chiciura.
There are two secondary schools and a high school in the city.